Q: How can you tell House, M.D. is fiction?
A: They never have problems with their EMR or other IT systems.

The following reads just like the script for an episode of House. But it’s for real:

”The man’s sister came to visit him on his second day in the hospital. As she walked into the room she was immediately struck by her brother’s distress.
’Get me out of here!’ the man shouted from his hospital bed. ’They are coming to get me. I gotta get out of here!’
His brown eyes darted from side to side as if searching for his would-be attackers. His arms and legs shook with fear. He looked terrified.
For the past few months, the man had been in and out of the hospital, but he had been getting better — at least he had been improving the last time his sister saw him, the week before. She hurried into the bustling hallway and found a nurse. ’What the hell is going on with my brother?’ she demanded.”

Every month, the Diagnosis column of The New York Times Magazine publishes a real case, and challenges its’ readers to find the correct diagnosis. In Think Like a Doctor: A Confused and Terrified Patient (Feb 7, 2013) the readers learned about a a 55-year-old man well on his way to recovering from a series of illnesses, that suddenly became confused and paranoid.

What’s special is that NYT Magazine provides us with all the actual medical notes, labs and imaging results (with real names omitted). All in all, there are 40 pages that the readers are invited to browse on documentcloud.org (click the image). 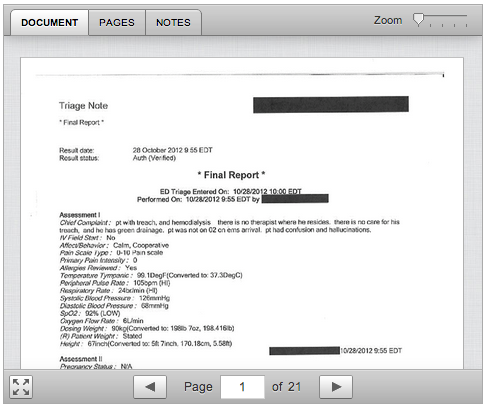 Having examined the case, several readers found the solution to the mystery: excess levels of the neurotransmitter serotonin, caused by a near-fatal combination of medications from the hospital, from the rehab facility and others.

But what’s interesting to us is the conclusion the column’s writer, M.D. Lisa Sanders, makes when presenting the solution of the case:

”Electronic medical records were supposed to help solve this problem [communication about medications, my note] but it seems they more frequently focus on the kind of information essential for billing so that, whatever problem the patient has, the hospital or facility gets paid. By providing too much information that isn’t medically useful, and not enough that is, electronic medical records are just one more barrier to good health care, one more red herring in the pursuit of a correct diagnosis.”
(A Confused and Terrified Patient Solved, NY Times, Feb 8, 2013)

So EMR and EHr software, in its current form, instead made a problem they were supposed to help with more difficult.
”The comments about EMR not helping are certainly on target”, one physician wrote in the comments section. ”Over-medication with dangerous drugs is the other half if the problem. Drugs that are pushed by big pharma, in order to make money. Our docs need to learn to be a little more skeptical before adding more and more meds for every patient they see!” says another. 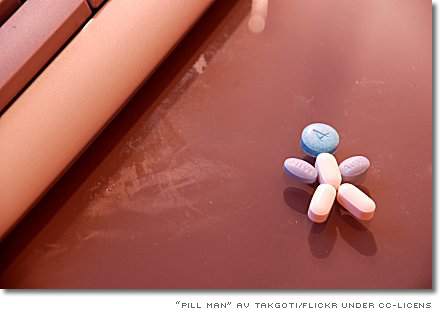 Avoiding unwanted drug interactions is now a main selling point (pushed by IT companies) for introducing even more IT systems in health care. Companies typically claim that harmful combinations of medications will be detected, auto-magically.
This might sound good at first. But so far, the IT industry has not really made good on many promises of fantastic effects of their IT health care systems. Plus, to me more IT would be an expensive way of not fixing what is actually the problem: over-medication. So first we pay money to Big Pharma for too many pills; then more money to Big IT for fixing the symptoms (and conserving the problem).

But what about the patient, then? Well, like in a good episode of House, he recovered and is neither depressed or distressed any more.
The health care sector, though is still in distress. That’s depressing.

En kommentar till Just like House – but with real-world IT